The History Behind Huong Lan Restaurant

Huong Lan – How it all started

1955 to 1975, the United States and other countries support the
capitalist camp of the Nanyue kingdom, such as the Soviet Union and the
socialist bloc countries support North Vietnam, waged 20 years of war
confrontation is known to history as the Vietnam War. The impact of Vietnam
war, a large number of Vietnamese refugees who had been forced to leave their
homes to an unfamiliar country, Canada had also ushered in two waves of
immigration tide of Vietnamese refugees.
The first wave after the Vietnam War began in 1975 – 1976 to Canada
received 5608 Vietnamese refugees. These were mainly from the
middle class, mostly because they have the professional skills, or in
Canada, there are guarantors and by the Government of Canada for receiving.
The second wave of immigration tide occurred in two different stages.
The first occurred in 1979 to 1981 between are provided mainly by the
unbearable new deal in demanding conditions of the Nanyue Kingdom fleeing
refugees. Unlike the first wave of refugees, this wave of refugees
from various social statuses is called the “boat people” because many people
will need to take a boat sailing overcrowding to various refugee camps.
Canada at the time was the main refugee resettlement country, in this first
stage of the admitted more than 50 thousand Vietnamese refugees.
The second wave of immigration in the great tide of the second stage,
from 1981 onwards, continues to this day, it is known as “sustainable flow
of migrants, since 1991, has been gradually reduced.
While today’s story is precisely the Vietnam War, immigration, and
struggle for the gem story. The story of money and who put their life and
death risk to emigrate to Canada from nothing to the final success in Nanaimo
run a Vietnamese restaurant. 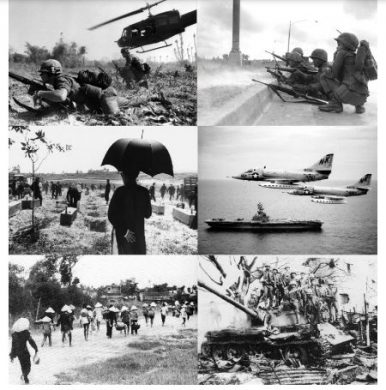 This is a Vietnamese restaurant to the Orchid Naming – Huong Lan, has four times been mentioned in Nanaimo news bulletin and was voted “Best Asian Restaurant” in the famous International Travel Comments website and the Internet
(TripAdvisor cats) and cities of the scoop on evaluation by spoon) very high.
From 1998 since its opening, Huong Lan restaurant has successfully captured the hearts of the
Nanaimo communities people, which will enable us to know the
traditional Vietnamese food delicacies. The restaurant is named after the boss’s wife. The name of the Lan Huynh; there is also a restaurant with the name
of the Lan, echoed them.
As the restaurant slowly got on track, the son of Lan, Tom,
started to take over the family restaurant very early. Perhaps it is because the then
young Tom dimly recalled  his childhood and mother risking
their lives to the Vietnamese border, with only the word “interesting.”
Twice the border through, Huong Lan restaurant of the same family, when the Vietnamese War in the
the country suffered, and the family members have to choose, as have the majority
of the “boat people” first, fled to the refugee camp of asylum, then select
a new national start again.
When Lan with four-year-old Tom wants to go secretly to
Vietnam and Cambodia border aboard a ship to depart, and Lan’s husband
Toan and other family members at the same time scattered in different places,
were also seeking a ship.
The first escape attempt through the border with gun-carrying soldiers
they were grabbed with tom together in prison.
“It is my mother with a child; they do not want to do with her child,
then a few days later on us. Tom”.
After coming back home, Lan had not given up the idea of escape, and
the next day at midnight took off with tom and returned to the original escape.
“If the border defence of the soldiers in the nightlife was found, they
would be shot dead we…” of the
the border between the two countries has lush foliage, through bushes is
a beach and sandy beachside is the international waters, a boat in the
still waiting for it.
Through the darkness and tall grasses, these Lan and Tom will shadow
buried the bushes, staring at the ship not far away, but with wide and obscure
the sandy beach of isolated from the Grassland and vessels, LAN and the
delayed departure.
Time in a little bit of time, and the two of them in the bushes from
midnight until dawn, gradually raise. Sun almost cross over the gravel trap,
if it is to take advantage of sunny, hiding in that gleam, longer emancipated
into words…….
“may have been shot dead.
These may exist only agents Picture Movie, while lans and tom is just a
woman and a child, they do not have the courage to take such a risk. Lan
repeatedly, after weighing with small tom, sneaked across to return to their homes.
This is the second time, and this is the last time you want to enter the
escape. 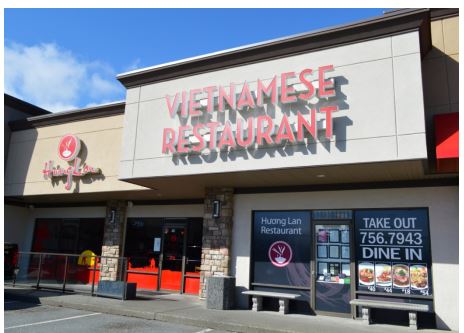 Family Reunion Canada
even though the lan and Tom has failed, but the husband can successfully
the logged ship, Canada a Church is willing to act as the guarantor of the husband
lan, soon lan husband in Canada received citizenship.
After eight years of a lengthy wait after her husband started to plan and
Tom and access Canada, a family of three, finally resumed reunion.
Initially, a family living in Edmonton, the winter freezing weather,
minus 46 degrees in the cold season, also to their respective work to make
a living.
In Tom’s memory, because it is Canada they a family of three of them do not
speak English; his father and mother have been doing labour for earning money.
They then went to a family of Vancouver, and because the island has a work,
and finally select in Nanaimo settlers.
Buy painstakingly built Restaurant
1998, Tom’s parents with labour under the cache money to buy the Nanaimo
local one small restaurant, named Huong Lan.
At that time, the restaurant is only 9 tables, and we are just now waiting for
the size of the restaurant, a space-constrained. So while the initial plan does not
have any experience in the restaurant, the good chance on her very day.
Early in her tour around the taste of the many different Vietnamese cuisine,
and she only with a keen sense of taste can be cuisine.
The restaurant located on the land is frequently asked the views of the
guests, with time, and she has had its own set of unique
recipes, these recipe has been hung lan for 15 years has remained unchanged.
As a result of the strenuous conditions for the family, Tom begins at
the age of 14 from different places in the city. He successively visited
Vancouver and Victoria, a roundabout way after determination home to help
home in Charlie’s Restaurant.
The completion of the university administration, Tom began to take
over the restaurant, wanted to use their the TCDC modality in charge of this
place.
The former restaurant, plus all of the family members, only four to five
employees, the number of daily working hours to 12-16 are commonplace today
restaurant on track, employees increased to 30+ persons, a family can also
have more time to go out and tourism.
Tom said that to manage the restaurant properly, he lost a lot
of time, when his classmates let him go out and play, he has to stay in the
restaurant. Tom has now will run a restaurant as their own lifelong undertaking,
which is different from the mother, Tom focuses more on restaurant operations,
he hopes to be able to connect lan Huong in creating an appropriate for the
North American region.
The three major success criteria
The ambitions of the restaurant lan Huong never do the Nanaimo six
Vietnamese restaurant a”, but “Nanaimo six restaurants in the top of the
home”. 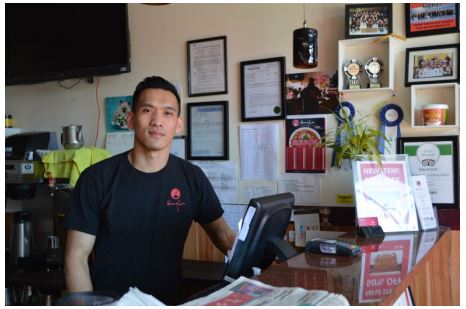 Tom refers to operating a restaurant, as indeed a very brutal, 10
restaurants with nine will fail during the first year, has the highest failure
rate of 90%, within five years, perhaps the first ten restaurants only a
firm, the reason for this is that their lack of work experience, short of
money, technologies, and gave up.
The work in detail may bring down a restaurant, mainly to insist
that the lessons learned from gaining experience. For example, Huong Lan had
been robbed of three times when the heavy losses, but in the end got over
it. This insistence on them on several practical experiences, the next
time you can less fear, also know how to handle things.”
Tom also referred to the restaurant there are three major criteria. The
The first one is to have a good recipe, and the second is the good ingredients and
the third is human resources management.
“While some people believe that the recipe is essential, but I think
that human resources management is even more important. Most of the land Huong
older employees they, more than the rookie of the year, fewer mistakes also
must not private emotions into working there must be timely communications,
compared to the problem, we prefer to before timely communications help
prevent problems from occurring.
Recently tom is planning a within the first year of the second chain
restaurants, “possible in the South or the North District, but more inclined
to North District, close to the Woodgrove mall, all current in the making.”
Tom a family-like Huong Lan restaurant within the moth orchid flowers –
with strength. They use their own power to break free from the shackles of
war, surpassing the life of hardship, which has led to creating a better
future for them. It is affected by the impact of the Vietnam War, select to
emigrate to Canada struggle of the tens of thousands of Vietnamese families
in miniature. The Vancouver Island weekly hopes that all are pioneering the
settlers have been able to have the power of orchids identify themselves
fragrances. (Jing)

Both locations in Nanaimo and Parksville are hiring!

Tell your friend and family or submit a resume by clicking on the link below:

Huong Lan will be closed from July 22nd until August 11th.

We will see you all again when we re-open on the 12th!